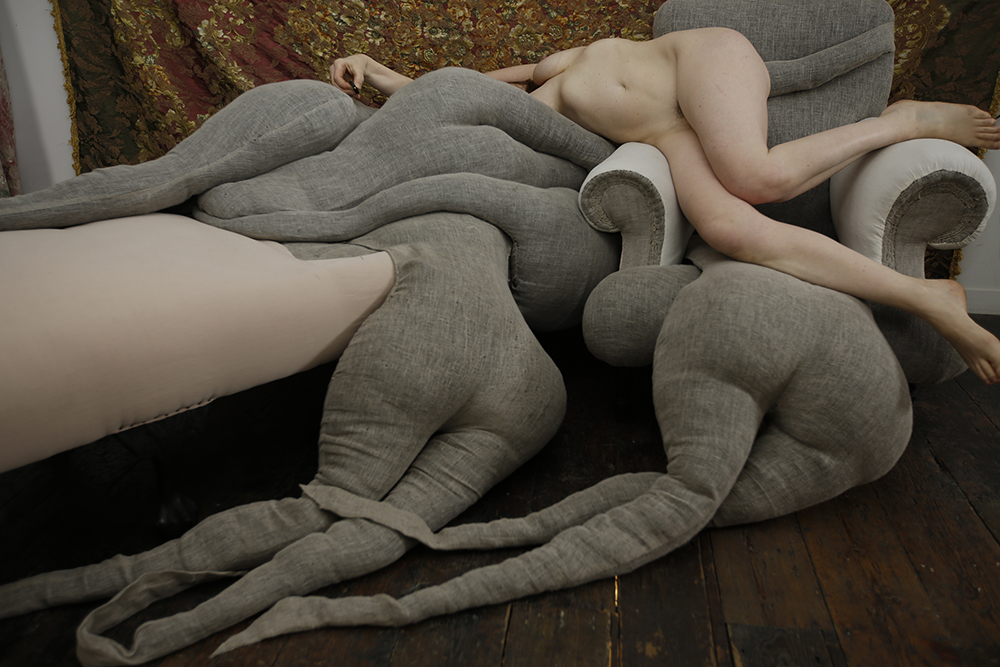 Theres a slow rise happening in my studio as artists come and go making their work. Doors slam, paint lines form then disappear. Machines whirr and there is laughing and chatter in the low, late afternoon light.

Things that began open-ended are taking space and taking shape. Something is cooking real slow and delicious on the burners. Working collectively like this on 3StreetsAway is a good way to crawl out the other side of winter.

Gail Sagman is installing her work – part painting, part structure. She talks about Tanning’s longing to make a painting that had “no exit at all”.

Polly Penrose has been round entangling her naked self into the distorted hessian bodies on my chaise. Using a ten second self timer she photographed herself maybe forty times to get the image she wanted. At the end she was covered in scratches and cuts from the unforgiving fibres in my women figures. It’s a beginning she says. But I want more she says. She will be back next week.

Gaby Agis comes in and out most Tuesdays and sometimes Fridays working her dada dance – measuring the breath that is the moment before all movement begins. She is a shapeshifter that Gaby. Sometimes animal and sometimes woman. Strange how dancers can do that.

Alice Humphreys makes images that move from there to here and Jude Dennis has begun stitching her tumbleweed on an old treadle Singer sewing machine with deft precision.

Angel Zatorski is plotting. She draws in a book. She stands on ladders. She is a dark one. You don’t know what you will get from her.

Fernando Mialski is still in Brazil but will be here soon. He talks about making body parts that float over the street. Dorothea dissected or Dorothea resurrected. We will find out soon enough.

As for me, Im stuck in the back room chasing down Chinese gazelle on the internet. Meret Oppenheim used the fur of the real beasts on her cup and saucer but Im going for the fake stuff. It seems more appropriate in these times of fake everything that I skin only the mythical synthetic beasts for my work.

I have been three times now to Mr Singh on the Goldhawk Road in Shepherds Bush. He teases me with fur samples in the way a shifty drug dealer does. It seems everything is too fluffy or too light or too short or just too damn expensive. He encourages me to linger and swoon over his luxury stuff, sniffing and stroking it and imaging my vision spread out before me.

But money is tight so I reluctantly go back to the studio and continue trawling through the bargain basement stuff on the internet. My vision shrinks and I give that bargain basement a good metaphorical kick.

Then wonder of wonders….I find Mr Singh and his luxurious furry temptations also have a website!
All roads lead to Rome! Mr Singh is my own personal Rome!
I get the endorphin rush of a consumer with her prey in sight.

I reason that if a woman is only going to make one furry road in her whole lifetime then surely its got to be more wild wolf than dreary mouse?
What would Dorothea do?
My fingers walk me back across the keyboard to the luxury department.
I deliberate.
I angst.
I hear Gaby’s strange breath
The sewing machine whirrs.
Someones laughs
I press
BUY.

© MISS POKENO: MADE IN LONDON (MOSTLY)